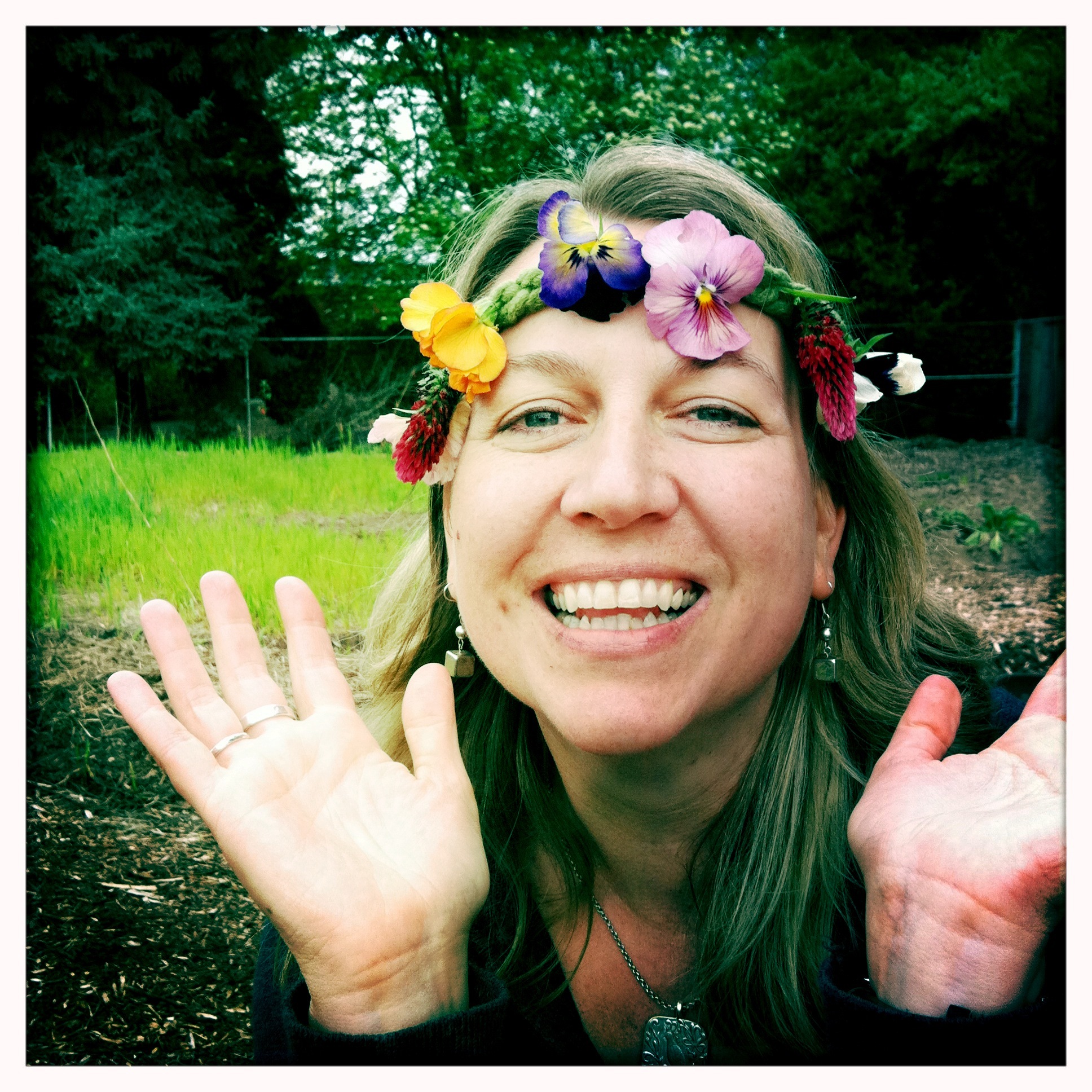 Hello dear humans who subscribe to my extremely intermittent newsletter,

Over the coming months I'm doing events and/or teaching classes in California, Vermont, Massachusetts, Oregon, and British Columbia. I'll write more about them in a moment, but if you want to skip right to them, you can find details by clicking here.

It's May Day and I woke to a winter wonderland in rural Wyoming, where I'm spending the next several days writing. Having grown up in Minnesota, I've experienced many days of snow in April and May (and once, even in June). It's common enough that my fellow Minnesotan, Prince, wrote a gorgeous song about it—and yet it's always a surprise. It feels a like a gift because of its unexpectedness. The audacity of snow in the season of flowers.

When I opened my computer this morning, Facebook presented me with a photograph of myself I'd posted several years ago on this day. In the photo it's 2011 and I'm wearing a garland of fresh flowers that my children had made for me. My kids are teenagers now, but at the time they were attending a gloriously funky preschool that celebrated May Day as if it were the biggest holiday of the year. The families gathered for a vegan potluck. The children wore garlands and danced around the maypole they'd spent the previous days festooning with ribbons.

As I gazed at the photo of myself with flowers in my hair I realized I didn't know exactly what May Day is, so I went where I go when I want to know things such as this: Wikipedia. There, I learned that May Day is actually three things. It is the holiday that has people skipping around maypoles, it is the holiday that is also called International Workers Day, and it is a distress signal, spelled as one word instead of two and not capitalized—mayday—because who the hell has time to capitalize and add a space when the ship is going down?*

Every time I hear about something being more than one thing—which is a lot of times—I try to uncover the hidden layers and connections and discreet meanings among and between them. This must really mean that and in some buried but profound way it's also connected to this other thing. I think about 70% of my work as a writer is doing that sort of digging and ruminating. Especially when I'm writing memoir, which I'm doing right now—with agony and joy.

Writing has always felt that way to me—two seemingly opposite things. Agony and joy, every damn day. Like flowers and snow. Like May Day and mayday. Like the ship is going down and yet still we bloom.

I'm teaching a writing class in Mammoth Lakes, California in June called The Story You Have To Tell. In the class, we'll write together and talk about layers and connections and how to trust the sparks within us so we can write the stories we most ache to tell. I'm teaching another class in Whistler, BC in August that's called Clarity, Courage, Truth, Power that's aimed at exploring and igniting qualities that allow us to live creative and courageous lives. It's not exactly a writing class, but we'll be writing a lot in it and it's useful to writers too. Both classes are short, single-day engagements and both are part of larger gatherings that are packed full of excellent and inspiring things—the Mammoth Yoga Festival and Wanderlust Whistler. In each case, you can register for the entire weekend or just my class.

Later this month, in fact really soon--on May 16--I'll be at Scripps College in Claremont, California, where I'll be interviewed on-stage by the phenomenal Heather Havrilesky. As many of you likely know, Heather writes the beautiful, intelligent, funny and wise advice column Ask Polly and is the author of three terrific books. I've long considered her a kindred sister spirit and I'm so excited to talk to her about all things writing, life, love, and advice-giving. Tickets are only $10 and selling fast. You can get yours here.

In June I'll be talking to another brilliant woman, Rachel DeWoskin, who is not only a wonderful writer, but a dear friend of mine. She has a scorchingly good new novel coming out in June called Banshee. I love it so much I begged her to come to Portland so we could do an event together. It's on June 19th at my hometown bookstore, Broadway Books in Northeast Portland. It's a special ticketed event (your ticket gets you a signed copy of Banshee) and seats are limited, so get yours soon if you want to go. You can buy it here.

I'll also be coming to the east coast for a couple of events in June—to the Latchis Theater in Brattleboro, Vermont on June 25 and later that week to Boston for TravelCon. The event in Vermont is in celebration of the 40th anniversary of the Brattleboro Hospice, which does important work in their community on the issues of death, dying, and grieving—which you know are close to my heart. The event in Boston is a big, fabulous gathering of travel writers, photographers, and others who work in the travel industry (or want to). At TravelCon, I'll be speaking on June 27th about the transformational power of travel. If you decide to attend, use the code "50off" at check out and you'll get $50 off your registration fee.

I hope your day is a good one, friends. I'm off to my writing studio now, which is a 15-minute trek away. I'll put on my hiking boots and walk through the snow, dreaming of flowers and of finishing this agonizing/joyous book. Or both.

It is always this. May Day/mayday.

*Actually, it's because in 1923 a radio officer named Frederick Stanely Mockford was asked to come up with a distress word that both French and English pilots would understand and he chose "mayday" because it sounds a bit like the French m'aider, which means help me. (Thank you, Wikipedia.)

If you wish to unsubscribe or change your email address, visit the newsletter page of my web site and complete the submission box on the right side of the page.

Click the link above to get Dear Sugar in your inbox once a month by becoming a paid subscriber. You can also sign up for my free newsletter at either this link or by completing the form below